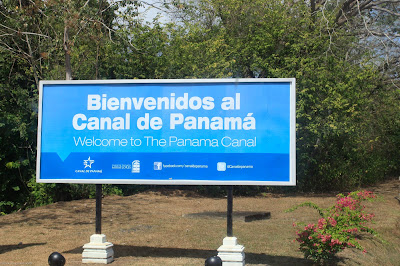 I arrived in Panama late on Wednesday night and after a good night sleep, we hit the ground running with a whirlwind bus tour to really get a sense of the city. While some might consider that to be muy turistica, we owned every moment of our tourism. I have never been too proud or too cool to have that wide eyed enthusiasm for a new place. Give me all you got. Our bus trip was hop on and hop off so we were able to take some time at our first stop which was the Miraflores Locks. 1 of 3 sets of Locks that make up the Canal and usher boats from ocean to ocean. It  is a marvel of engineering and a beauty to behold. The only bummer was that we arrived later than anticipated and didn’t get to see it in action but having lived there, I got to see that years ago. 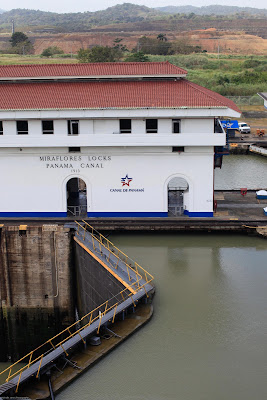 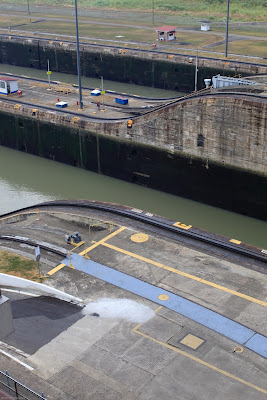 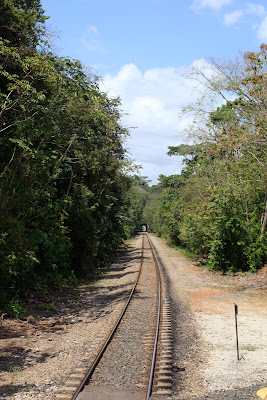 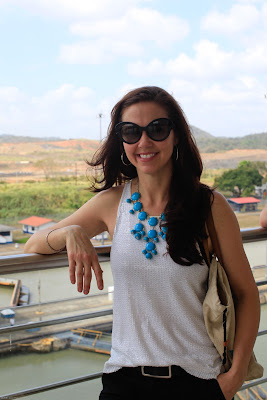 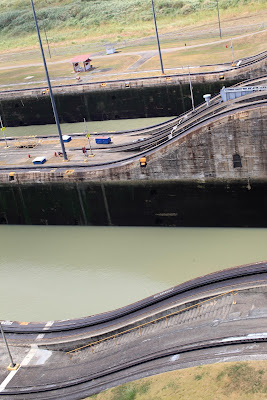 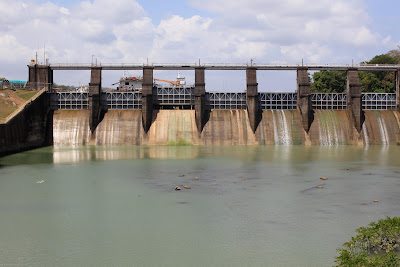 We hopped back on the bus and our next leg was the Amador Causeway. We didn’t actually get off at that stop because we would be back out there the next day for lunch but the ride did offer us expansive views of the city with it’s sky high apartment buildings and beautiful Pacific waters. There were also ships galore in the water waiting to pass through the Canal. Papa Gar found an app that told him that there were approximately 178 boats in the area on this side of the Canal. That’s a lotta boats! 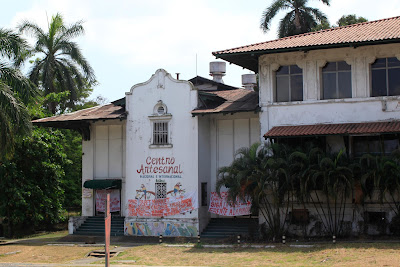 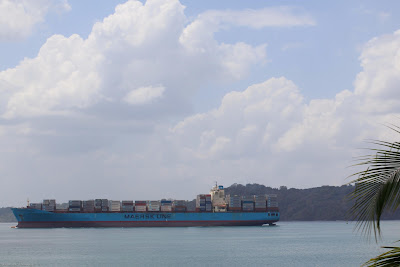 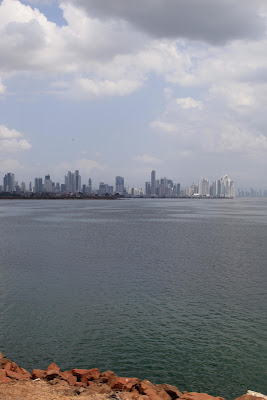 Our next hop off to explore and have lunch was the beautiful Casco Viejo. This was one stop I had been waiting for. I don’t believe we ever went down there when we were residents and from what Mom said there wasn’t much to see down there back in the day. It may have just been a residential area. No Se. But after years of neglect it is being revitalized and there is a really interesting mix of old and new to walk around and explore. We were starving so our first stop after numerous distractions for my lens was a darling little restaurant called Rene Cafe. The Rents had been there already but it seemed there were limited choices for lunch and they had really liked the food, so Rene it was. It was cool inside with an open kitchen and the owners son’s paintings on the wall. Rich hues of reds, yellows and oranges anchored by brown and black flowed in brushstrokes that formed portraits of sax, piano and guitar players. The menu was very simple and was a prix fixe so “You have just one choice to make and then you can relax and let the kitchen surprise you with mixture of local and international dishes” according to the website. And relaxing and surprising and enjoyable it was. It started with a lovely salad of chopped vegetables in a light, tangy vinaigrette, followed by a yummy little frittata, and then the main course of a yellow rice and a beautiful piece of corvina lightly breaded with a delicious pesto sauce. Oh and I can’t forget the dessert, my stepbrother would be so disappointed! Lastly came the lightest of sweet creme folded into the fluffy layers of a perfectly cooked crepe topped with a smear of creamy carmel. Heaven. The food was fresh and plentiful and we had a lovely meal. Perfect beginning to the trip. We spent most of the rest of the afternoon wandering around Casco Viejo marveling at the beautiful architecture, old and new, picking up beautiful handmade goods from local artisans along the waterway, chatting (as best we could for the first day) with the locals, practicing our Spanish and yes, buying Panama hats and wearing them PROUDLY. It probably didn’t help that mom and I both got them but we didn’t care and just said “Buenas” to all the people who sort of grinned as they walked past. Buenas Indeed. 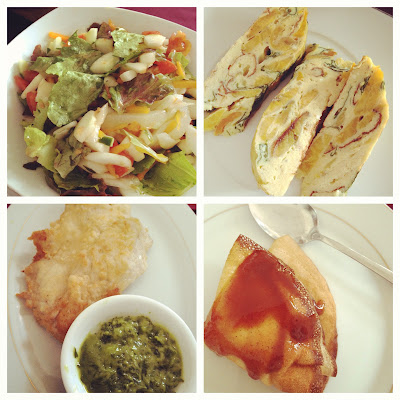 A Return to my Childhood*

My dad was a pilot in the military. I grew up an Air Force brat and my first memories began when my family was stationed in the Panama Canal Zone in the early 70’s. We moved there when I was four and spent four years at Howard Air Force Base where my dad flew helicopters. I remember the base being like a big playground. There was a big hill out behind our house that we used to run around on. There was an actual playground down the street that we played in for hours after school. I remember taking swimming lessons at the base pool that was Olympic sized (which is HUGE to a kid) and the first time I ever jumped off the high dive i thought my heart was going to pound out of my chest it was so high. I remember going to the movie theater on Saturday mornings with all my little friends to watch the newest blockbuster. The only one I actually recall seeing was the Poseidon Adventure because it scared me to death. I have still never been on a cruise!

Panama is where I learned to do a lot of kid firsts. Swim, ride a bike, roller skate. It was great living so close to the equator at Christmas because you would open presents and be able to go right outside to try them out. I remember getting roller skates one year and literally by 10am they were on my feet and I was out on the side walk. Can’t do that if you grow up in Montana. Just saying. Panama also had some “unique to the tropics” aspects that most people I know have never even heard of. Three toed sloths? Yep, saw those. Lots of them, hanging out in the trees out back. Iguanas? Yep, those too. I remember someone grabbing the tail of an iguana one time and it popped right off and the rest of him ran away. That was interesting! We also had a “nanny/maid” named Carmela as that was the norm in Panama. She helped with cleaning and laundry (according to my mom, Carmela didn’t like her and would shrink her tops) and took care of me when my parents were out. We would take walks along the sidewalk that snaked past all the houses and eat mangos right off the trees. Life was good then and there.

After we left Panama, my dad was stationed in Florida and a lot changed once we got there. It’s been thirty five years since we left. My parents divorced and have since remarried. I, who was once an only child, am now one of 5 kids, step and half. I myself have been married and divorced and now live in New York City. I think about Panama now and then and my parents and I talk about times there. I love to look at old pictures and see our old house and the bahia we used to go to on the weekends in our boat. I love the pictures of my cousin Holly and I sitting in front of the Miraflores Locks watching ships move through the Canal and the molas we brought back with us from the Kuna women who made the brightly colored applique panels. So many memories come flooding back whenever I think of Panama. It was a sweet time in my life and I believe it had a profound effect on the shaping of my personality and outlook on life.

One thing that always made me sad though, was that I never thought I would return. Howard is no longer an AF base and the housing is probably being reclaimed by thick Panamanian jungle. There are a laundry list of places in the world I want to visit so the idea of going back to a place I have already been seemed redundant I suppose. Then my stepdad began to plan his retirement and the subject of Panama came up. My parents decided to travel for about three months upon his big life transition and they planned on ending their trip with time in Panama. “You should meet us down there,” went from being a thought thrown around for the last year to a reality yesterday when I bought my ticket to go in three weeks. I hemmed and hawed for the last two trying to decide if I should or not. Do I have the budget? Can I be gone from work? Is it safe there? Will I have to get a Typhoid Fever shot? (That friends was almost the deal breaker for me as I vividly remember the GIANT syringe they stuck in me at 4 with both of my parents and a nurse holding me down while I screamed bloody murder.) Thankfully no on that last point.  So when I pulled my passport out and realized that I have had it for five years and there is not a single stamp in it, the deal was sealed, I was going to Panama.

Now I can barely contain my excitement at the thought of being back there. I have been obsessively pouring over the internet, looking at the beautiful images of the city and the beaches and February 20th can not come fast enough. Not to mention it has been arctic in NYC lately. Did I mention that Panama is about 9 degrees from the equator? Yeah, sandals and sundresses and bikinis here I come! My dad has been telling me stories of the fish market and how he would take visitors down there and purposely make them walk through the meat market with the sides of beef and whole chickens and other meat products hanging up in the open with no refrigeration. My mom refused to go but from what I hear my dad loved it and would bring back fresh fish for dinner that had been swimming that morning. I plan to have numerous conversations with both parents between now and my trip about places we used to go and things we used to do so that I might retrace and see how things have changed. I.  CAN’T.  WAIT.

*Footnote-I obviously meant to publish this prior to my departure. Oooops!
Posted by michelle at 5:07 PM No comments: