I have decided to expand this blog to not only encompass my running adventures but my culinary ones as well. To me they kind of go hand in hand because one must fuel well to run well, Oui? So Friday night I was in major slash and burn mode, going through my kitchen cabinets and I came across a number of old recipes that I forgot I had and that I really liked when I made them. I decided to make a list for the farmer's market Saturday morning and actually go with a plan instead of willy nilly like I normally do. I pulled 5 recipes and here is the first of them. it is an open face sandwich with pesto, asparagus, tomato and melted cheese. You are supposed to top it with ham too but I missed that altogether so I made it veggie. You broil it until the cheese melts and you enjoy immensely. 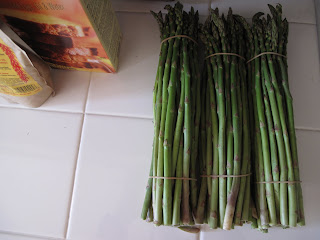 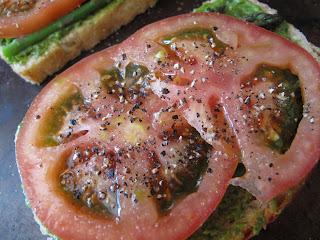 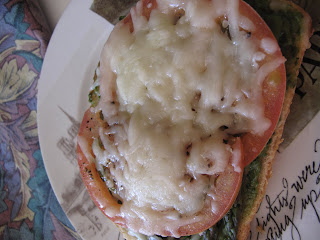 You know how running is supposed to make you happier and relieve stress and all that stuff. Well, generally it does all those things and more for me. But there is, on occasion, the odd run that shows me who I really am, inside if you will. I was already running later than I had planned on Tuesday when I took off. I just figured I wouldn't dry my hair and I would still be able to get in 4 miles before work but I would have to step on it. So off I went in the cool morning air with a little cloud cover overhead. I felt pretty good and it seemed like it was going to turn out to be a nice run. I ran my normal route but as I got up to the school at the top of Tustin Ranch I noticed it was busier than normal with kids on bikes and walking and such. Not bad, just busier. I chalked it up to being a little later on the trail than normal. So I crossed the last light and went up another half mile before I turned around and that is where it all went south. I got back to the same light and there were now crossing guards at the two opposite corners and a million (no, I am not exaggerating) kids and cars. So I waited my turn at the crosswalk, patiently. A little less patiently. A little less patiently, as I watched them cross all three other walks and skip me before the guy across finally yells to me that the one crosswalk I am waiting for is in fact, CLOSED. "Seriously?", I kinda yelled back. He couldn't have let me know before the light changed 3 times? Grrrrrr SO I turned off all my tracking gear and walked over to the other crosswalk which now took another 2 lights before the other guy actually let us go. I am sure my crossed arms and sighing told them exactly how I was feeling at that moment. But, I didn't think it would be wise to jaywalk in front of 400 young impressionable preteens. Not to mention having no desire to get yelled at or worse, whistled down by a crossing guard. They can be mean. Annoyed! "This is totally messing up my pace time", I thought. Oh my gosh, could I get any more anal retentive? Yes, apparently so. Not wanting to wait for yet another light to cross back over and get back on the trail I decided to go straight through and cross at the next one. I jogged through the intersection once I turned all my stuff back on thinking to myself, "can't you see I am a runner? I don't have time for this." Wait, did that really come out of my mouth? Well no, but I couldn't believe I was being so self righteous even in my head. Ok, jog it off. Oh no. Not quite yet. I get to the next light and it also has a crossing guard and I notice that the direction I need to go is conspicuously empty as well. I stop next to him and ask him if this side is closed. What do you think? Yep. REALLY? Oh for crying out loud. And then I had the audacity to say to him, "but I need to get back on that path". Oh waaaaaah. What a whiner I am. This poor guy is trying to do his job and I am crabby at him because I can't cross the road by myself. He could obviously tell I was annoyed because he tried to explain that with so many cars it just isn't as safe to cross that way. Yeah yeah buddy I know but I am a big girl. I am also a play by the rules girl. So, I dutifully crossed when he let me and I even mustered a "thank you" as I took off. Needless to say my 4 mile run took me 46 minutes and regardless of knowing that at least 5 of those were standing still, I wasn't pleased with the idea of uploading that. I did actually feel much better just down the road as I realized what a nightmare I was being, if only mostly in my own head. Maybe I can blame it on PMS. Whatever it was I was glad to put that one to bed and get in the shower. And I was still late to work. Eh c'est la vie.
Posted by Michelle J at 9:41 PM No comments:

I now have the Carpenters stuck in my head. Awesome!
Posted by Michelle J at 7:03 PM No comments:

That was my goal today, with no real goal hanging over me. I just wanted to be "out" for an hour. I didn't want to put pressure of how far to go, how fast to go, etc. Just get out and move. I strapped on my fuel belt, that I hadn't used since my race in October. It was feeling so lonely. Strapped on my ipod and laced up my shoes and off I went. I walked for a warm up and when I got to the corner I took off running. And felt REALLY GOOD. It was such a beautiful morning to be out. The sun was out but it was only probably 60. It was shady and cool and wonderful. I usually fast forward songs that come on the shuffle that I don't want to run to but in the interest of "no rules", I just let it run. I love it when you come across a song you have never heard before. I must have bought a whole album at some point and not listened it. A song came on today called Damaged that was just lovely. Ethereal, soft, not a bad tempo to run to and I still have no idea who it is. I will research that later. My point is, it was a nice surprise. Although I almost reached my limit when the Carpenters came on. There are just some songs that are NOT good to run to. But I persevered, remembering that the Carpenters were one of my favorites when i was just a wee little one. I remember being about 4 and loving "Top of the World" and singing it constantly. Must have been where my love of singing started. I remember having the album, yep I said it, album, and it opened up to a picture of a red car. I carried that thing with me everywhere. So although it was challenging to run to, it did bring mack really nice memories. And isn't that sometimes the point. To get you out of your own head and to forget about the drama and the humdrum in your life and to just let thoughts run through that cleared out space. That's why I run anyway.
What else? Ok so i ended up running the trail away from my house and into Irvine. I ended up on the trail that I ran so many miles on while training for my marathon. I was hoping I would run into some old coaches and mentors but I was either too late or they are in between seasons cause that trail was EMPTY today. It was lovely and quiet but I did miss my running buddy Steph. What a great experience that whole season was. I cannot wait to do it again now that my knee seems to be much happier. So, yeah, I ended up running and then doing a few bouts of walking and ended up running about 4.5 miles of the 5.5 total. I was out there for a good hour and with 42 minutes of running I am back to about a 9:30 pace. Look, just because I didn't have any goals doesn't mean I didn't track every step. I already said I had all my gear strapped on. :) I know, I know, I am little Type A that way. And that is how I like it. So anyway, bottom line it was a great way to start the weekend. I felt refreshed and ready for some fun. I will be looking for a race to sign up for very very soon. That's fun for everybody!
Posted by Michelle J at 6:29 PM No comments:

Good morning running peeps. It was a good morning out on the trails this morning, although it was a tad chilly for old SoCal. My knuckles got quite numb. Well I take that back, the knuckles on my right hand were nice and toasty in the sleeve of my pullover which has lovely little thumb holes. Best invention ever. Well ok maybe not EVER, but right up there. But the knuckles on my left hand had to suffer out in the cold because of my Watch, which with the GPS is too bulky to cover and uncover while trying to keep running. It was just too much trouble so I ran with a frozen hand for a good 3 miles. Not something you might expect for March in Tustin. But it was a beautiful morning. The sun came up and cast long golden highlights against the tree shadows. Everyone seems to smile and say hello and all lower limbs seemed happy to be out running. Made for a great start to my Wednesday. I did about 4.5 miles as I am getting ready to help with a running club at work. So there will be lots of stories in the coming months as I get back to running regularly and you know what my brain does out there on that road. Kooooky. :) Stay tuned.
Posted by Michelle J at 3:50 PM No comments: